skip to main | skip to sidebar

The past is dead?

So read the first few paragraphs of the Princes Journal. The duke held it in his hand as he pondered the way that history would repeat itself. For now Noverre was in a state of Armed peace.
The forceful negotiations of the envoys from both Monrovia and Wittemberg had calmed the situation. Certainly Noverre and Els would continue with their disputes, he was certain that Raids across the border would continue.
But for now, an uneasy calm lay across the land.
The Duke was not displeased with the situation, there were only limited resources at his disposal and far too many demands upon them.
The time available he would use to good effect, officers would be encouraged to seek employment in the Armies of Wittenberg, to gain experience in the arts of war. The corps of Engineers would be very busy improving the state of the nations defences, and he determined to raise a Legion, a flexible force that could be loaned to nearby states, thus saving the costs of upkeep and training.
For now he had the opportunity to read some of the books in the royal library, The volume he held in his hand, telling the history of Medieval Noverre, The history of the Elsian war of Independance or Civil War,The fictional works of future wars in the Colonies,and Dorsetshire.The Nothelm Chronicles, and many others.
For now, the Duke was almost content and he settled to read more.
Posted by Douglas at 00:56 4 comments:

Prince Leopold stood gazing out at the town, After 30 years of peace, the Kingdom was on the brink of war. The reasons were obscure, his father had ruled well if not always wisely, but now the Duke of Barraterrea had caused a rift in the fabric of tranquility. His support for the anti-pope Gregory against the rightful Ludwig was about to tear the Kingdom apart. Others would stand apart, each with his own agenda, The peasants and townsfolk wouls suffer, The merchants and Mercenary Captains would make their fortunes, and Leopold would have to fight and perhaps die for the Country he loved.
Posted by Douglas at 00:32 4 comments:

The Duke briefs his loyal agent Jacques le Pegge before he goes to the border. 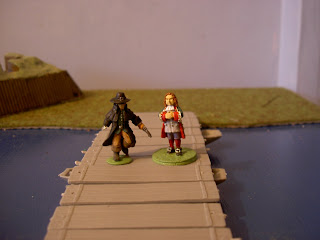 Jacques and his sister Jean leave to discover the truth in the rumours of Troops massing on the border with Els. 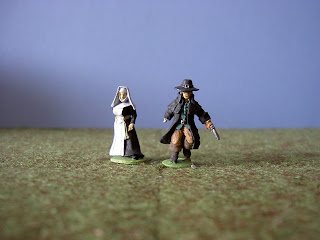 After many frenzied hours of discussion with the Chancellor it seems obvious that the Duke can only afford to raise forces very, very slowly.
True he has those troops raised by Herr Fiks and Messrs Zvesda and others, that were his original intention, they are however too small in stature to perform joint manouvres with those of Wittenberg.
It has been decided that the existing troops will be armed and equipped to defend the nation, whilst a start is made on searching for a suitable agent to provide men who can take the field to the greater glory of his realm.
Messieurs Green would seem the only viable option at this stage for Line troops at least.
Posted by Douglas at 06:44 3 comments: 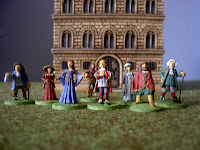 The Court outside the Town House 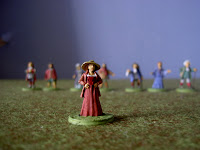 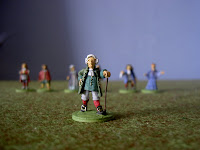 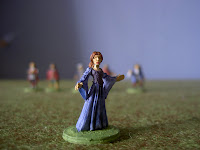 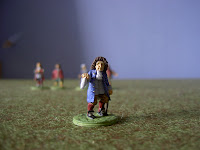 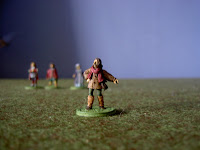 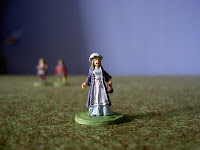 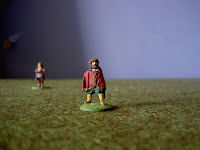 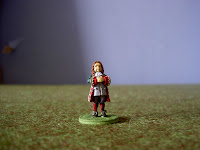 As promised, Thanks Allan.
Posted by Douglas at 12:19 6 comments:

It has been a busy day for the Duke, Starting with his poseing,( again) for his court picture, for a long while he has managed to avoid all appointments made for sittings by the Duchess, but today failed. His likeness has now been captured in oils by the renowned artist Pierre Kodak.
and an official viewing has been promised for this very evening.
Barely had he risen, when a member of the household approached with a waterlogged package, found on the body of a Courier from Els to the Monrovians.
It is believed that the man met his death at the infamous Risenbach falls, high in the high hills to the North.
Retiring to his chamber, he opened the blood and water soaked package and studied the contents.
It was obviously a government document, written in bureaucratese, and much was illegible.
With the aid of a glass,he copied out the documents for study by his advisors.
Although fragmentary, some phrases could be clearly read.

" Whilst at first glance, this may appear to be a parodoxical dichotomy, the reality is far more complex"
" This term may not be used in future as it has been discovered that 4% of the population can no longer be considered a minority"
" I`m not here to work, I`m in charge."
"Can you not accept that your use of the word Americanism, might be taken as being rude and disrespectful"

Clearly in code:
He must pass it over to the experts, that little band known as " The Followers"
Posted by Douglas at 09:43 1 comment: 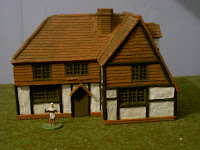 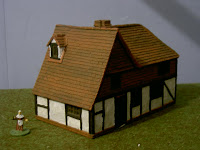 The Duke was in his Counting House.

The Grand -duke sits with his head in his hands,
The cause of his distress;
The price of brushes, more than 2 ducats apiece.

The costs of civil improvements, clothing for the Duchess, subsidies for University students, upkeep of the Ducal carriage combine to make his treasury resemble that of Grand-mere Hubbard.
How is he to pay the commissioning agents to increase his field army, clothe them, provide horse and Baggage, fortifications, Cannon, a new palace?

Time perhaps to look at the taxation system;
For many years it has been the custom to receive half of all taxes due in the form of labour or services.
The people of the towns and countryside, whatever their rank, serve their nation for one day a week, building and maintaining roads and bridges, forts and palaces. Or serving where their expertise is most needed. The cash paid, less costs of collection are thus available to purchase the raw materials, and services of experts like Monsieur Vaubum, or Leonardo the Handyman.

A simple system, half the cash collected, requiring half the costs of collection.

So labour is no problem,
many of the neccessary materials lie within his realm,
but money, aye that is a problem.

Sipping at a glass of Amber nectar, gives him pause,
The entire population is known for its inventiveness in turning fruit and vegetable into liquor, (in the widest possible sense at least.)

If control could be established, many a neighbouring state could enjoy(well endure)
Noverrian brews and vintages, Barges could travel continent wide, bringing much needed revenues to his coffers.

Then troops could be raised to circumvent the machinations of Els, Monrovia and others.

Then too could he afford paint, yeah and brushes too.

He steps outside, turns and admires the newly decorated facade of La Bete Noir. 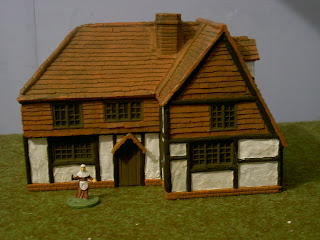 Bon nuit mes amis, he calls to the world . 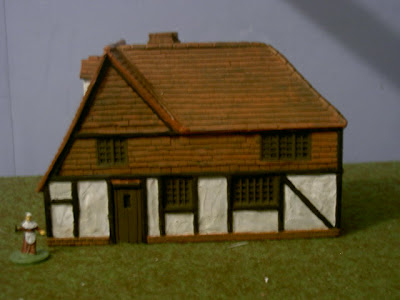